The eruption of Mauna Loa is not affecting our operations and our tours are operating as usual. We advise that guests travel North on Hwy 19 through Waimea when traveling to Umauma and Hilo. 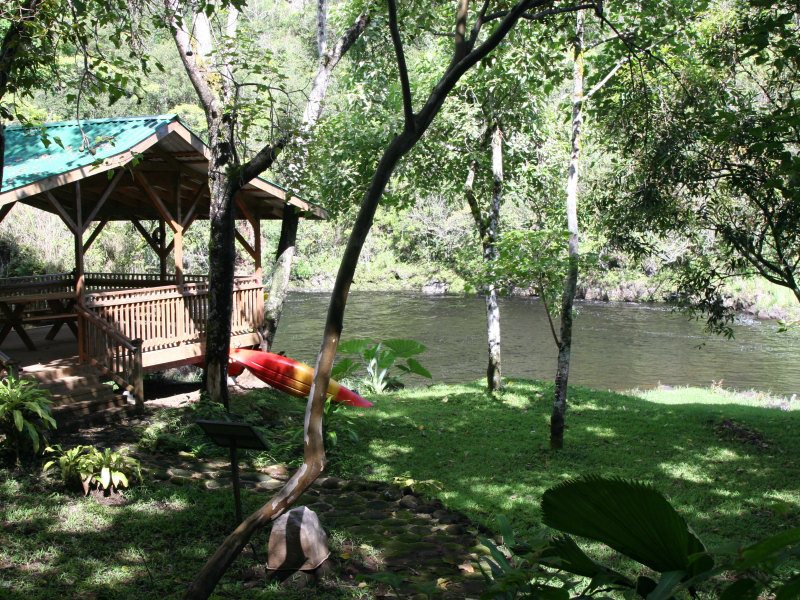 The Umauma River in Hakalau, Hawaii has waterfalls, swimming holes, and interesting history!

The Umauma River is one of many rivers that originate on the slopes of Mauna Kea Volcano and flow down through deep gulches out to the sea along the northeastern coast of the Big Island of Hawaii. Characterized by countless cascading waterfalls and deep plunge pools, the Umauma River is distinctive in that it has the only triple-tier waterfall formation on the island. This unique river and its surrounding watershed are rich in natural beauty, as well as Hawaiian history.

History of Hakalau and the Umauma River

The Umauma River is located in Hakalau, Hawaii, which is home to some major events in Hawaiian history. Hakalau was the site of the battle lead by Kamehameha and Kekuhaupi`o against the warriors of Maui in 1791. This battle was an important event in Kamehameha’s rise to power and unification of the Hawaiian Island chain. After the battle, King Kamehameha lifted the Naha Stone, one of the most infamous relics in the Hawaiian Islands that today rests in front of the Hilo Public Library.

Hakalau was known for being an excellent location for growing traditional food crops like taro, ‘awa, coconuts, bananas, and sweet potatoes. The Umauma River and surrounding streams served as important sources of freshwater for irrigation. In 1848, the “Mahele” or Hawaiian Land Distribution Act gave the entire Hakalau ahupua‘a (a section of the island running from the mountain to the sea) to Keahikuni-i- Kekau‘ōnohi, the granddaughter of Kamehameha I. After Keahikuni-i- Kekau‘ōnohi passed away, and the Kuleana Act of 1850 established fee simple ownership of land, the Hakalau ahupua‘a was auctioned off in 1866.

In 1875, the Reciprocity Treaty was signed between the Hawaiian Kingdom and the United States, giving sugar grown in Hawaii access to U.S. markets in exchange for the land which is now Pearl Harbor. Thus, began the sugar plantation era. Hakalau was home to the Hakalau Plantation Company, established in 1881, and had a multi-ethnic population with many immigrants from Asia coming to work in the cane fields. After a series of consolidations, the mill shut down in the 1970s.

In 1985, the Hakalau National Wildlife Refuge was established to preserve 32,733 acres of land that contains endangered bird species and native Hawaiian rainforest. If you look at an aerial map of the Umauma River, you will see that it originates high up within the Refuge. The Umauma River and other nearby streams are fed by heavy rainfall, with areas below 4,000 ft elevation in Hakalau receiving an average of 250 inches of rain annually.

The Umauma River still holds physical pieces of history, including a flume damn that dates to 1910. The land the Umauma River runs through is either part of the Refuge or privately-owned ranch and farmland. Because of restricted access to the river by the public, it is incredibly pristine and quiet. The Umauma Experience owns a large section of property which contains the triple-tier falls, and some of the best swimming pools along the river. People travel from all over the globe to visit the Umauma River and soak in this magical part of the Big Island that has a very “old Hawaii” feel. An episode from the reality TV show The Bachelorette was filmed in one of the Umauma River’s beautiful waterfall pools. The Umauma Experience offers several ways to experience the river, including a private Kayak and River swim tour.

On the Kayak and River Swim experience, you’ll enjoy access to a stunning section of the Umauma River all to yourself. This is one of our most relaxing tours, giving you plenty of time to explore and enjoy the river and waterfalls at your own pace. At the bend in the river, a waterfall flows into a deep pool, offering the perfect place for a refreshing plunge and is large enough to float paddle boards and kayaks. There is a cliff next to the waterfall which you can climb up and jump off into the swimming hole for an exhilarating rush. A flat, grassy area next to the river pool gets direct sun for sunbathing and relaxing after a swim. Our large covered pavilion next to the river with picnic tables is the perfect spot to relax after a day of water activities and enjoying the catered lunch provided from our cafe as part of the experience.

Your tour will begin by checking in at our Visitors’ Center. It’s best to arrive 45 minutes before your tour time so that you can be properly check in. Our staff will give you an orientation of the Umauma River and safety while swimming and kayaking before transporting you and your family by 4×4 vehicle to the river. The staff will help you get familiarized with the area and answer any questions that you have. Clean bathrooms are available for your comfort. This is a guided tour and last for an hour and a half.

The river is normally calm and easy flowing without rapids of any kind. During periods of heavy rains, there can be flash flooding which renders the river unsafe to swim. Our staff monitor river and weather conditions throughout the day and will cancel a tour if the conditions are unsafe. If your tour is canceled due to weather, you will receive a full refund.

For the kayak and river swim experience, you’ll need your bathing suit, towel, and a pair of water shoes if you prefer to wear them. Additional items that guests often bring is a GoPro or waterproof camera, sunhat, sunglasses, reef-safe sunscreen, water bottle, and a sweatshirt or windbreaker jacket if you tend to get cold after a swim.